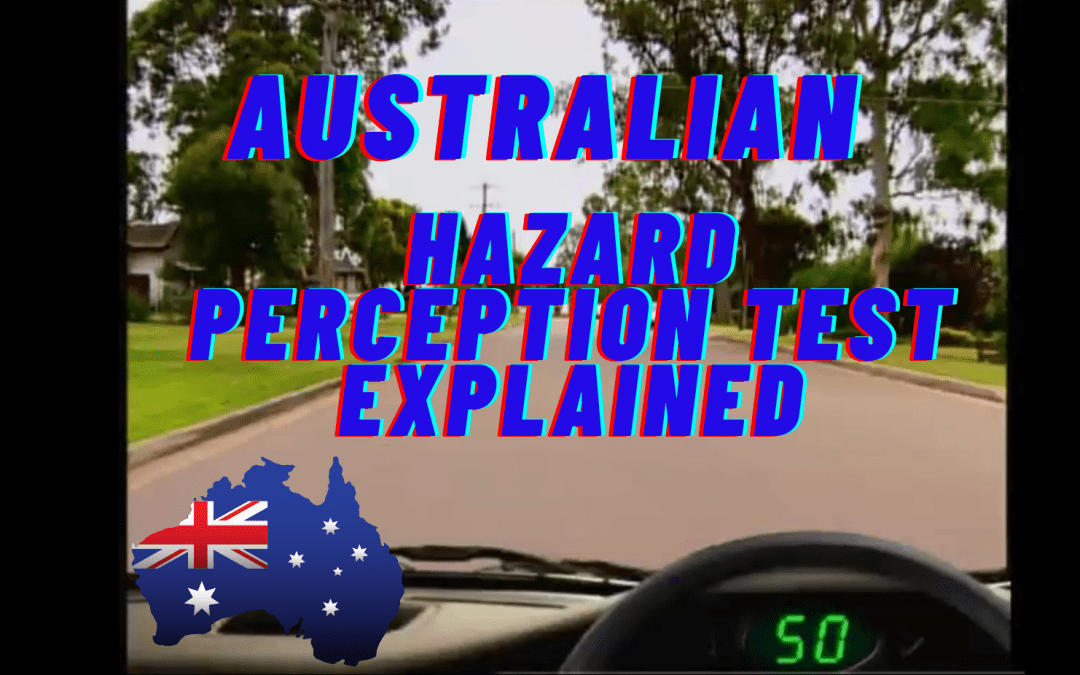 A while ago, I wrote a blog post about the British Hazard Perception Test.

However, the Australian version is different from the British version – and in some ways, it’s harder.

The screenshots for this post were taken from the Hazard Perception Test (HPT) Australia app. Download it from Google Play and AppStore here.

Just like the British equivalent, the goal of the HPT is to get you to identify and react to developing hazards on the road.

Regardless of whether you’re getting a driver’s license or a motorcycle licence, you have to go through the HPT as a part of your theory exam.

The test consists of a series of video clips where you have to click as soon as you spot a hazard in the road.

Before each video clip begins playing, you’re presented with a scenario, such as:

“You are traveling along a two-way road in a 50 km/hour speed zone. Touch the screen when you would slow down”

As soon as you’re ready, press the “Start” button, and the video clip will begin playing.

At some point, a hazard will emerge that you have to react to by clicking on the screen or by pressing a “Take action” button (usually located next to the “Start” button.)

How many clips do you have to get through?

The number of clips may vary depending on the region you’re in.

For example, in South Australia, New South Wales and Queensland, you only have to go through 15 clips.

In Victoria or West Australia, however, you have to go through 28 clips.

In either case, two of them will be “practice clips” – these will not count to your final score but are a good way to get warmed up.

Depending on how soon you clicked, you’ll score one point, and you have to reach a certain score to pass, just like in the British Hazard Perception Test.

Unlike the British HPT, however, you don’t score bonus points based on how early you detected the hazard – you either score a point or you don’t.

You also can’t click more than once – in other words, you can’t use the so-called “three-click approach.”

There’s also only ONE hazard per clip. As soon as you’ve detected the hazard, you’re done with the clip.

Also, it’s not always about taking evasive maneuvers (such as stopping). Sometimes, you’ll have to decide when to turn right or overtake.

If you clicked in time, you see a prompt, such as:

1. Read the instructions before each clip carefully

Remember, it’s not always about slowing down – sometimes you’re supposed to decide when to make a turn or begin overtaking another road user.

Make sure that you know what to do before you hit “Play.”

Yes, you read that right – you’re not supposed to click at all in some clips, which I call “trick clips.”

Look at this clip for example. You’re supposed to decide when it’s safe to make a right turn at an intersection.

However, pay close attention to what you’re actually supposed to do:

Did you see that? You weren’t supposed to click at all during this clip (since there was no safe gap for you to make that right turn).

Whether you’re supposed to turn, slow down or overtake, remember to pay attention to the traffic around you in the clip.

Stay particularly alert if there’s a huge vehicle that blocks your view – more often than not, there’s an approaching vehicle behind it. While this app is primarily designed for car licence takers, motorcycle riders benefit from it too.

The Hazard Perception Test (HPT) Australia app lets you take the test version based on the territory you’re in.

Download it from Google Play here and Appstore here.

Other posts in Getting a License, Videos