What You Need To Know About a Motorcycle Battery

How often do you think about your motorcycle’s or scooter’s battery?

Probably not all that much – until it goes wrong, that is.

But that’s a mistake.

Why? Because a motorcycle battery is one of the most vital engine components (next to the engine, of course).

Therefore, it pays off to know a little about this area.

And you’re in luck because, in this blog post, you’ll discover:

Why Does Your Bike Even Need a Battery?

Unless you’ve got an EV motorcycle or scooter, perhaps you’re a bit perplexed as to why your bike even needs a battery in the first place.

Doesn’t it run on gasoline or petrol?

Well, it runs off of a battery too, in a way. Actually, there are 2 big jobs that the battery is responsible for.

Job #1: Start and run the engine

More specifically, the battery provides the energy needed to activate the starter motor, which in turn turns over the engine to start the bike.

But a fully functional battery is also needed to deliver the spark needed to ignite the fuel and air mixture.

Especially if you have a motorcycle or scooter with a CDI ignition system.

Check out this blog post for more info about how a CDI ignition system works.

What is CDI Ignition, and How Does it Work?

Job #2: Power the lights and supply current to the charging system

Remember that your bike has lights – headlight, turn signal lights, brake lights, and so on.

And all those lights need a power source (among other things), especially when the engine speed isn’t high enough to deliver the current the charging system needs.

Fortunately, the battery is there to take care of both of these situations:

Most modern motorcycle batteries are 12-volt, but some small scooters use batteries with only 6 volts.

The 3 Main Types of Motorcycle Batteries

A conventional battery is easily identifiable by a series of filler caps at the top.

These caps have a purpose – to let you check how much electrolyte (a mixture of sulphuric acid and water) is in the battery.

As the battery charges and discharges, this amount of electrolyte inside the battery drops.

When it drops below a certain point (usually below the cell plates), it’s time to top it up with distilled water.

In case you’re curious, distilled water is water that has been cleaned of any minerals and bacteria.

If you have a battery of the conventional type, remember to remove the filler caps BEFORE you refill the electrolyte.

That way, any explosive hydrogen gas will escape and reduce the odds of an explosion when the battery’s connected again. 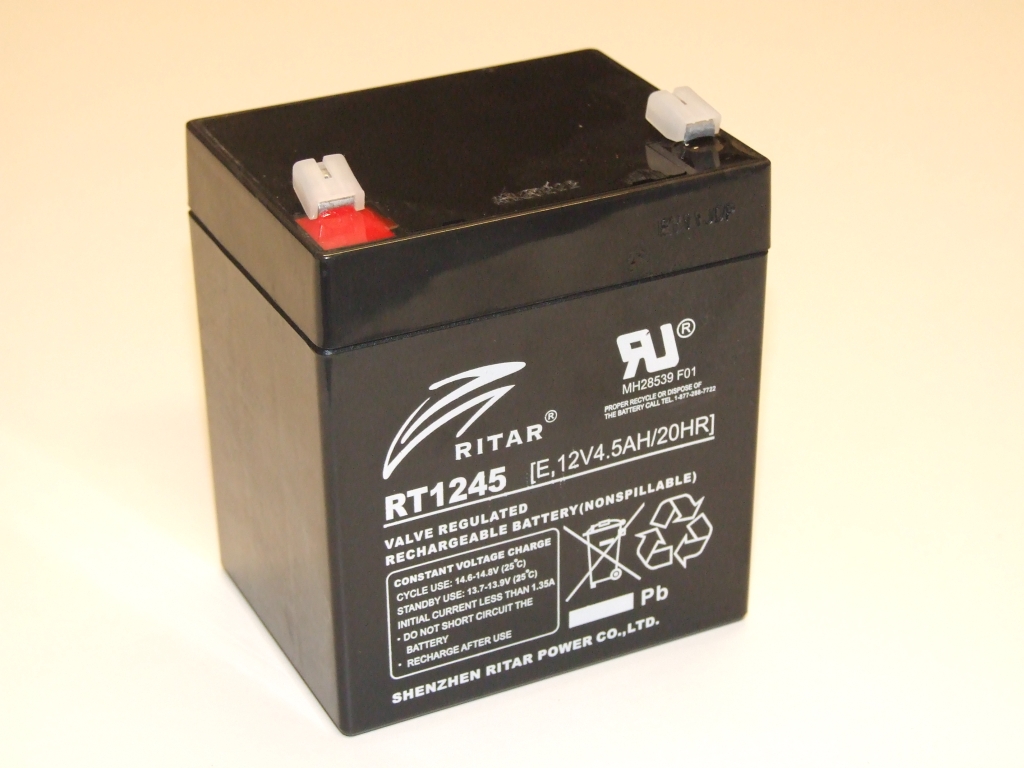 An AGM (or “Absorbent Glass Mat”) battery also contains an electrolyte solution like a conventional battery.

But that’s where the similarities between it and a conventional battery end.

AGM batteries are radically different from conventional batteries in many ways.

Firstly, an AGM battery doesn’t require you to top it up with distilled water. That’s because they contain absorbent fiberglass plates that absorb the electrolyte.

This makes the battery more resistant to short-circuits caused by vibrations. It can also hold a charge much longer.

In fact, because this type of battery doesn’t require refilling, it’s designed to be permanently sealed.

So, in other words, don’t attempt to open an AGM battery.

AGM batteries are also sometimes known as “maintenance-free batteries,” – although you should take this with a grain of salt because it’s not 100% accurate.

Sure, you don’t need to top it up with distilled water, but the battery still needs a bit of cleaning and inspection every now and then to ensure that e.g., the terminals aren’t corroded or loose.

To inspect a battery, you’ll need to disconnect it. If this is something that gives you the shivers?

If so, this post will teach you everything you need to know to get over this fear of disconnecting and connecting a motorcycle battery.

How to Disconnect a Motorcycle Battery And Connect It Again

Lithium motorcycle batteries are much lighter and smaller than conventional or even AGM batteries. It’s, therefore, a great choice if you’re looking for a lightweight, yet powerful battery type.

Of course, that’s assuming you have the budget because lithium batteries are expensive to manufacture and therefore more expensive than AGM batteries.

You may have noticed that your battery has the abbreviation “CCA” on it.

It might seem irrelevant at first, but it’s something to pay attention to – especially if you live in one of the colder regions in the world.

“CCA” stands for “Cold Cranking Amps,’ and refers to how much current the battery can produce during 30 seconds in cold temperatures.

Why is this important?

Because the colder it gets, the more the battery will struggle to carry current.

Therefore, the CCA rating indicates what kind of electrical current the battery can handle in these low temperatures.

As a rule of thumb, the higher the CCA rating is, the more current the motorcycle battery will be able to produce when the temperature is cold.

← How to Disconnect a Motorcycle Battery And Connect It Again

Other posts in Electrical & Electronics