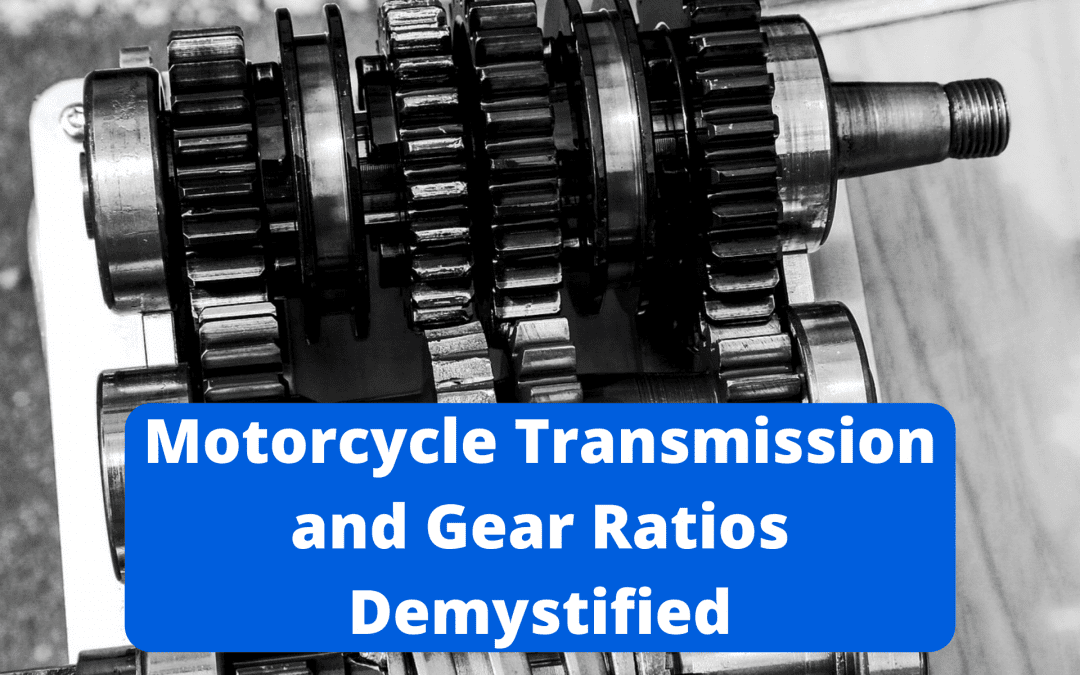 DISCLAIMER: This post contains affiliate links. I earn a small commission from purchases made through these links.

But it will cost you absolutely nothing extra.

Perhaps you think of your motorcycle’s transmission as a complete no-go area?

Why do you need gears in the first place?

And does the word “gear ratio” make you scratch your head so much you’re developing a rash on your scalp?

Then this blog post will help clear up this complex topic.

You might not become a motorcycle transmission expert after reading this blog post, but you will discover more about:

Prefer to get this information in podcast form? Listen to the 30 Minute Motorcycling Podcast episode about the motorcycle transmission and gear ratios:

The Motorcycle Transmission – What Does It Do? The motorcycle’s transmission contains a series of gears – hence why the transmission is often called the “gearbox.”

Each gear has two gears fitted to the input shaft and a corresponding one on the output shaft.

The engine turns the input shaft, while the output shaft sends the power transferred through it to the bike’s rear wheel.

When you select a gear, it locks in place to the shaft it sits on.

Anyway, the lower the gear, the faster it rotates. And the faster the gear rotates, the more power you’ll have.

Compare the acceleration you’ll get when you’re in first gear and compare it to third, fourth, or even fifth gear, and you’ll see what I mean.

A modern motorcycle transmission is usually “constant mesh” – meaning that no matter if they’re selected or not, the gears constantly mesh together with each other.

Before the constant-mesh gearbox, motorcycle transmissions used to have sliding rotating pinions that moved back and forth to change gears.

However, this setup meant that the gear changes tended to be unsmooth, and if you missed a gear, it resulted in the most dreadful noise – hence why these gearboxes were often called “crash gearboxes.”

Why do you need gears?

Simple – if your bike had no transmission, the power from the engine would be delivered instantly.

This instant power would be ideal sometimes, but all the time. To demonstrate, let’s compare two scenarios.

You’re at a traffic light, which is about to turn green. In this situation, it would be ideal to have more power to get going quickly and avoid getting rear-ended by the car behind you.

You’re already going quite fast, and if you get a sudden, instant boost of power, you might lose control of your bike and crash.

In simple terms, think of the different gears as a series of switches for different situations.

When you need to get going from a standstill, you select first gear, which gives you more power to make a quick acceleration.

Then, once you’re up to speed, you switch to a higher gear which lowers the power output. The problem with switching gears is that the engine has to run without the bike moving.

This is not an issue when you’re starting from a standstill. After all, you’re standing still anyway.

But how are you supposed to change gears when you’re doing freeway speeds?

Here’s where the clutch comes in.

The clutch is mounted onto the input shaft and temporarily disengages the engine to the rear wheel, often through a lever on your left handlebar.

When applying the clutch lever, the clutch pressure plate separates the friction and the plain plate inside the clutch housing.

After which, clutch housing spins freely from the clutch center and the crankshaft.

Then, when you release the clutch lever, the friction and plain plates are pressed together, and the clutch begins spinning with the crankshaft again.

Unless you stall the engine, of course, but that’s another story.

If you have a modern motorcycle with a manual transmission, it’s most likely of the all-in direct gearbox type, where you change gears with:

When using the gearshift lever, one of the selector forks inside the gearchange mechanism moves back and forth and selects the next or previous gear.

To get more of a context of how the shifting mechanism works in action, here’s a brilliant video from Cycle World:

What Does “Gear Ratio” Mean?

OK, now we get to the big question. But to truly understand what a gear ratio is, we need to revisit the gearing concept briefly.

Remember that each gear consists of a pair of gears – one for the input shaft and a corresponding one for the output shaft.

Even though they technically belong to the same gear and are linked together, they don’t rotate at the same speed – the input shaft rotates faster than the output shaft.

The gear ratio is how many rotations the input shaft has to rotate to make the output shaft complete an entire cycle.

To put this in context, let’s say that the gear ratio is 3:1.

For example, if the driven gear has 26 teeth and the drive gear has 18, the smaller gear has to turn 1.4 times for the large driven gear to complete one rotation.

Other posts in Mechanical, Transmission and Drivetrain