Is That a Lambretta Scooter With TWO Handlebars?!

Just like how there was a Vespa made for warfare, there was a Lambretta scooter with TWO handlebars.

Now that you know that, you probably have more questions – questions like:

In that case, you’ve come to the right place, as this blog will give you the answers to those questions.

What Is It, and Where Did It Come From?

As many know, scooters were all the rage back in 1960s Britain. During this scooter craze, the number of scooter sales went through the roof.

The only problem was that as the sales of scooters like Vespas and Lambrettas increased, so did the accident rates.

To reduce the sudden rise of scooter crashes and accidents, the Lambretta Concessionaires (the UK importer for Lambretta scooters) created modified versions of the Series 2 Li 150 and the Series 3 Li 125.

These particular models featured an extra pair of handlebars. In addition, they also had an extra clutch, rear brake, and a killswitch.

All of which the pillion passenger could operate. 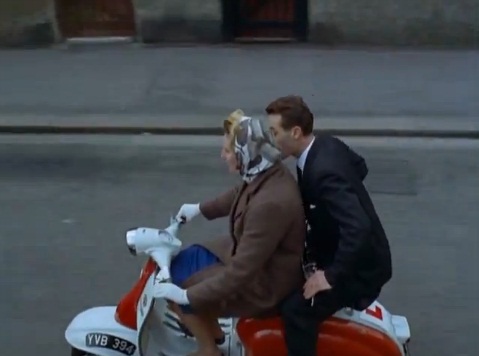 However, this was not a scooter that anyone could buy. Instead, they were given exclusively to scooter dealerships to teach people how to ride a scooter safely.

How Does the Dual Control Lambretta Work?

It worked similarly to how cars at driving test centers do.

As I mentioned earlier, this scooter had extra controls that allowed the scooter instructor to keep control in case the student didn’t – all from the pillion seat.

Not only that, but they could also steer the scooter – all thanks to the fact that the two handlebars were joined together by a metal tube, much like a tandem bicycle.

So Why Didn’t This Lambretta Scooter Catch On?

The main reason was cost – since these Lambrettas were specially designed, they were much more expensive than the bog-standard models.

And as a result, not many dealers wanted to buy them – and even those who did had a hard time making the money back for the purchase.

Does It Have a Proper Name?

Sadly, it appears that this model is nameless. Sometimes, the keyphrase “Dual Control” is used, but there’s next to no information if this model even had a name.

Keep in mind that the only ones who could buy them were scooter dealerships and training centers.

In fact, according to the book The Lambretta Bible by Pete Davies, there are no records of any road tests on any of these two-handlebar models of the Lambretta.

Not only that, but it’s unclear as to how many of these Lambretta Concessionaires made – much less how many are still out there today.

Some sources estimate that it’s as low as 2.

With that in mind, the ones that are still around have become sought-after collector’s objects, such as this one from the H&H Classics auction house in the UK, which is in nearly pristine condition:

Other posts in Scooters, Trivia & History