Puchjournalen Issues 1-4: The Origin Story, A 1971 Karen, and a Fabricated Opinion 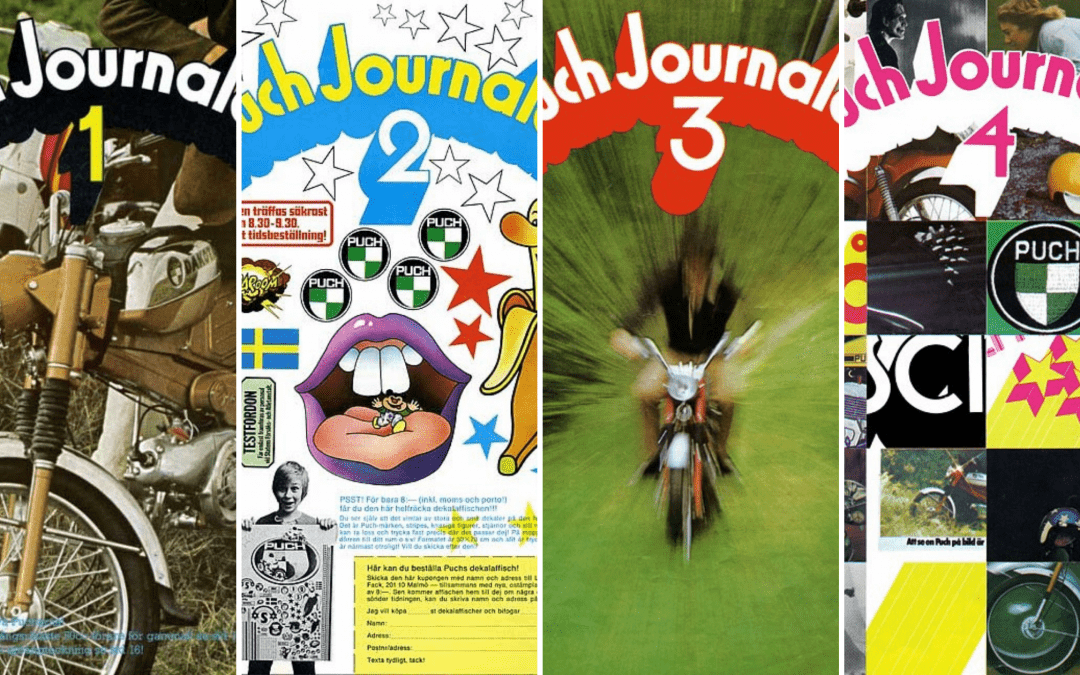 Let’s talk about Puchjournalen – a Swedish magazine from the 1970s for moped enthusiasts – particularly those who rode Puchs.

Obviously, this was way before my time. Therefore, I don’t have any anecdotes to share about reading this magazine.

But since it’s moped-related, I thought it would be fun to check out a couple of issues.

In this 5-part DWJ 1-year anniversary special, we’re going to take a look at every issue of Puchjournalen – from the very first one to the very last issue, we’ll go over things like:

But before we get to that, a brief background story of this magazine.

Special credit: I’d like to thank Puchverkstan.se for uploading digital versions of this magazine.

Puchjournalen (which translates to “The Puch Journal”) was a magazine/sales brochure hybrid released by Lundbolagen – the Swedish importer of Puch mopeds and scooters.

Then, if you wanted more, you had to go to your local Puch dealership to collect the next issue.

And that’s the most important thing here – “collect” – not buy. This magazine wasn’t available from your local grocery store. And apart from the very first issue, you couldn’t get it delivered to your mailbox as a subscriber either.

As you may have already figured out, the mopeds featured in this magazine are exclusively from Puch. So don’t expect to see any mentions of the Tomos Sprint, Suzuki FS1, or any mopeds from other brands. For this very first issue, there’s not much to say. Out of the 15 pages, most of them are ordinary sales pages – showing off the different models from Puch (or at least the mopeds).

I’m sure it was exciting to read about this back in the day, but today, you could get the same information, and more in your owner’s manual. Thankfully, there’s more than just advertising fluff in this first issue. There’s also an interview with a police officer about, among other things:

In case you’re curious, if you get caught with an illegally modified moped, it’s impounded and you’ll be written up for reckless behavior. The second issue was released in February 1971 – and this is the only resemblance of a consistent schedule that this magazine ever had. From here on out, several months would go by between issues.

But I digress – let’s get to the magazine itself.

My favorite part is this historical article that talks about the origin story of the moped. It’s a fascinating read if you love automotive history (which I do) – including the origin story of the term “moped.”

In case you don’t know, the term is a combination of the words “motorized” and “pedals.”

At the back of the magazine, there’s this cute comic strip called “Minne, Manne, “Malte” – which is about three moped riders (although only two of them actually have mopeds). Specifically, this issue is about Malte buying a beater of a moped for the equivalent of $5. Granted, that was a lot more in the 1970s, but I don’t think that $5 bought much back then either – after all, his muffler falls off when he stops,

And as we’re about to see, a $5 moped also gets you in trouble with Johnny Law.

In panel 7, this lady hears the noise from Malte’s moped and phones the police, telling them there’s an “invasion of greasers” near the square – based on a complete assumption.

Keep in mind that she’s not filing a noise complaint, as she says, “it must be those greasers – how horrible!” in the last panel.

But the background makes it hard to tell where they’re standing – they must be close enough to hear the noise from Malte’s moped. But I assume they’re not close enough to see that it’s not a couple of greasers but rather a kid on a piece of junk moped.

We may have found the original Karen.

And then, the police dispatcher informs all units about a supposed “greaser riot at the square.” It’s absurd, considering Karen never mentioned a riot (and if she did, it must have happened between panels).

The last we see of Malte is when the cops surround him, with him in the middle, surrendering. Quite the cliffhanger.

But then what? What’s the fate of Malte?

I don’t know – this is the only issue that contains this comic strip. None of the other issues that I could find (physical or digital) have another Minne, Manne, Malte comic strip.

So I guess we’ll never find out what happened to poor Malte. I suppose that he got 25 to life after being indicted by a kangaroo court, with Karen as the judge. The biggest thing to talk about for this issue is the Puch VZ50 endurance test in Teknikens Värld (which translates to “Technology’s World”).

Despite being ridden around a track for 6 hours straight, the VZ50 kept going, blowing away the competition. Impressive! But despite this, some articles in this issue don’t fit the moped niche at all. Take this article about some model ship that won some contest, for example: It’s pretty and all, but I don’t see how this is related to mopeds – the word “moped” isn’t mentioned once in this entire article. Remember the article in issue 3 about the model ship that had nothing to do with mopeds? This issue has a similar article about science fiction, which begs the question: That would be like if you went on The Dual Wheel Journey only to find an article about making Beef Wellington.

Oh, and they also spoil the ending to War of the Worlds. While it’s no Haynes manual, it gets the point across. I have to admit that after reading this section, I finally figured out how to change the throttle cable.

Here’s a prime example of how to do a tutorial right – the descriptions are well written, and the images complement them brilliantly.

The only other noteworthy thing in this issue is this discussion article about the Puch Maxi and the Puch DS 50 (known in Sweden as the Puch Alabama).

Specifically, it asks the question if the Maxi is a “girl’s bike” and if the DS 50 is an “old fart’s bike.” (yes, that’s seriously what the headline translates to): I never knew this was a thing, but it was. Apparently, some people considered the Maxi a girl’s bike.

But why? According to the article, it’s because it has an automatic gearbox. But I consider this to be a complete fabrication.

As for the Puch DS 50, it’s an “old fart’s bike” because it’s heavy. But this doesn’t seem right, for a few reasons.

First of all, the VZ50 (AKA “Puch Dakota”)- arguably the most popular Puch in Sweden- weighed 3 kilos more than the DS 50 (something the article even mentions). But despite this, the VZ50 didn’t get the “old fart” label on it.

Furthermore, by that logic, wouldn’t that make the Vespa or the Lambretta an “old fart’s bike?” The frame is just as large, and yet, there are plenty of women who love Vespas and other scooters. And that’s another thing – the Puch DS 50 isn’t a moped but rather a scooter.

As such, to call a bulky-frame scooter “heavy” by comparing it to a nippy bicycle-frame moped isn’t exactly a fair comparison.