Puchjournalen Issues 18-20: The World’s Fastest Maxi, The Editor Lashes Out Against The Readers and The End of Puchjournalen 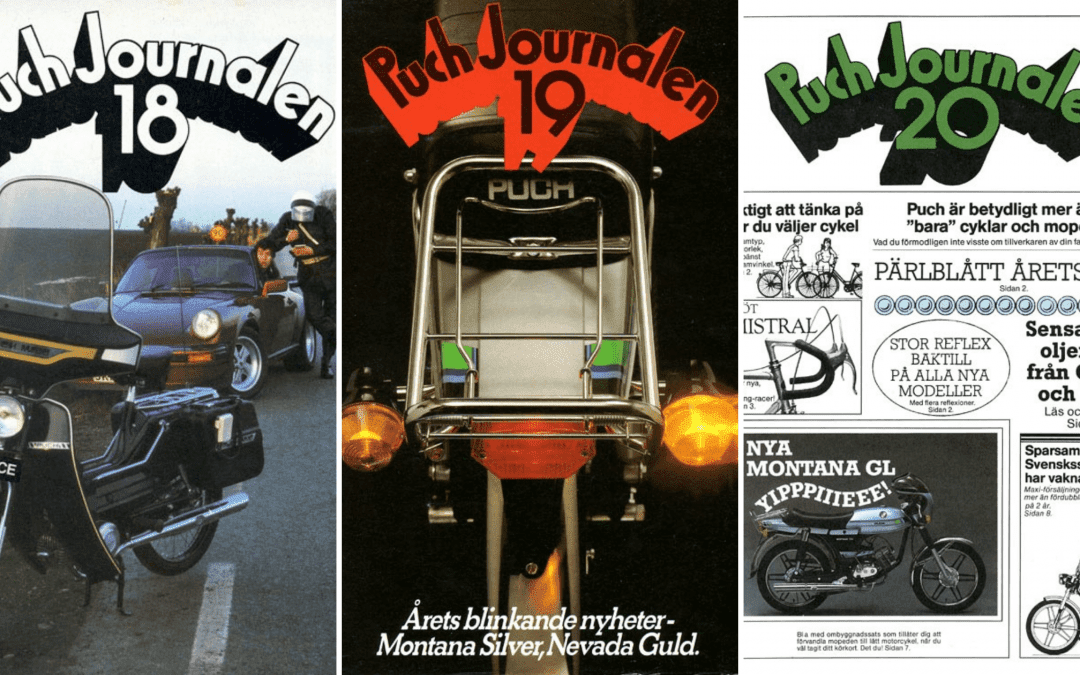 And now, we’re about to conclude our visit to Puchjournalen.

In this fifth and final installment of the Dual Wheel Journey 1-year-anniversary special, we’re looking at Issues 18-20, released between 1980-1982.

During this time, the moped wasn’t as popular as it used to be – evident in these last issues, which have a stronger emphasis on bicycles rather than mopeds.

But before we put it to rest, let’s check out the remaining three issues.

Special credit: I’d like to thank Puchverkstan.se for uploading digital versions of every PuchJournalen issue. First, let’s talk about the front cover – which shows a Porsche being stopped by a police officer on a Puch Maxi. I find it hard to believe that a 50cc Puch Maxi could keep up with a turbocharged Porsche.

And the face of the guy in the Porsche  is just priceless – it just screams, “I can’t believe that just happened.”

Apart from that, the most interesting article in this issue is this one that talks about golden bicycles called ‘Puch Free Spirit Luxus. “

And when I say “golden bicycles,” I mean “bicycles made out of pure gold.“ But impressive as it is, but also impractical. This must be a limited edition for collectors – nobody in their right mind would mass-produce bicycles made of gold to the average consumer.

Then, there’s a contest of sorts where Puchjournalen were looking for 10 test riders: Although, as we shall see in the next issue, things took a…different turn.

The only thing that’s left in Issue 18 is the back cover. Just like the previous three issues, it features a piece about mopeds in other countries. This time, it’s the UK. This issue shows how to build a Puch bicycle. Yes, “bicycle” – not moped. Not all that interesting. But do you know what is interesting? Not to mention hilarious?

Remember that contest in Issue 18 where they were looking for 10 test riders? Well, in this issue, we get to hear what happened.

But surprisingly, that’s not the funny part.

The funny part is how the editor Red reacted to it – because here he is, almost berating the readers for not applying with a headline that reads “Are you all millionaires?”

And it gets better, because, he then goes on by asking:

“Do you really have that much money that you think riding for free for a whole year isn’t worth it? Or were you just afraid of doing some work?”

The butthurt sure is strong with this one.

But seriously, why is he lashing out against the readers? It’s so juvenile that it’s laughable. Seriously, I don’t think that I’ve laughed this hard in a while at something so unintentionally funny.

And good ol’ Red must have been in a crap mood that day, because he’s up for more.

On the page where people send in letters, he starts out by continuing to scold the readers for not sending in enough letters like they used to, asking “have you all got writer’s block all at once?” Red – please go and scream into a pillow. And check your blood pressure. You need it.

Hilarious flamewar aside, the only thing worth mentioning is the back cover.  Once again, there’s info about mopeds in other countries. This time, it’s Austria – the home country of Puch. And finally, we’ve come to the last ever issue of Puchjournalen, released February 1982 – well over a year after issue 19 came out.

And while the magazine started about mopeds, it was mainly focused on bicycles by now. Also, there’s a lack of a page where people send letters to the editor in this issue.

What a shame – I was looking forward to the carpet bomb worth of angry emails towards Red, the editor, for lashing out at the readers in Issue 19 for the fact that the test rider thing didn’t go as planned.

In fact, out of the 8 pages (front and rear cover included), only three talk about mopeds – barely half of the magazine.

On one of these pages, there’s an attempt try to sell mopeds to adults by mentioning how you don’t get stuck in traffic when you’re on a moped like you are in a car. But it’s not as futile as it might seem. It’s actually a very noble effort that was well ahead of its time.

Either way, that concludes the story of Puchjournalen, as issue 20 was the last one.

Even though I don’t have any memories of reading any issues of this magazine, I had a lot of fun reading them now.

There are excellent tips and advice that someone dipping their toes into the moped waters could use, such as maintenance and repair advice.

The magazine also has a few unintentionally funny moments, like Red’s hysterical rant against his readers because a contest didn’t go as planned.

If I had been around back in those days, I most likely would have read this magazine cover to cover, the same way I read The Official PlayStation Magazine.