The 1970s Moped Craze in America – The History & The Brands

The United States of America might not be the first place you think of when you think of mopeds. But there was a time in the 1970s when mopeds were all the rage. Yes – mopeds – as in those small motorized bicycle-like two-wheelers with pedals (hence the name). In this special 150th blog post, we’ll examine:

In the 1970s, America and much of the Western world were shaken by not just one but TWO oil crises – one in 1973 and another one in 1979 brought on by changing OPEC policies. And keep in mind – electric vehicles hadn’t caught on back then – if you had a vehicle, it had to run on gasoline. And as most American cars at the time weren’t known for their fuel efficiency, it was a huge price to pay just to run your car. As a result, scenes like the picture displayed below in Maryland in 1979 with cars lining up at gas stations were all too common:

Warren K. Leffler, Public domain, via Wikimedia Commons
Some places put limits on how much fuel each person was allowed to buy – and some even went so far as to completely halt the sale of gasoline. To bring awareness of this issue, The Office of Energy Conservation released this PSA, which features none other than Academy-Award-winning actor George C. Scott delivering the memorable line “I suggest we don’t be fuelish.”
To summarize, America needed a fuel-efficient vehicle. Badly.

The Moped Comes to America

Mopeds had already been around in many European countries as early as the 1950s but hadn’t quite taken the U.S. And one of the main reasons was because of legality. The problem was that these new things had no precise classification. They weren’t bicycles – but they weren’t motorcycles either. But now, with fuel prices being as high as they were, the moped had an attractive selling point – and it was spelled “100 MPG.” In 1974, the National Highway Traffic Safety Administration (or NHTSA) officially recognized the moped as a vehicle under the legal name “motorized bicycle.” Later the same year, the Motorized Bicycle Association was formed. Headquartered at 1001 Northwest Connecticut Avenue, Washington D.C., the goal of the Motorized Bicycle Association was to, among other things, to: 2: Promote a better understanding of governmental regulations that affect mopeds 3: Educate people on the safety and utility of mopeds The story of how mopeds arrived on American oil is rather interesting – just like Lady Liberty, it was a gift by the French. A French gentleman named Serge Seguin had travelled across the U.S. promoting the moped – (specifically, a Motobecane.) This new “moped” had a small size (and often the pedals) of a bicycle but the motorized capability of a motorcycle – albeit a tiny one. After much lobbying, Seguin managed to get 30 states to create a specific moped classification.

Just state laws vary on everything, so did the restrictions on mopeds. Generally speaking, back in 1977, you had to be a certain age to ride a moped: However, some states, like Indiana, Ohio and South Carolina, had no age restrictions.
Unsurprisingly, given the fuel crisis at the time, the moped took off – it’s estimated that in 1977, over 250,000 people owned one.  And the news of this traveled fast, and above all, far – as far away as Sweden. This issue of the Swedish moped magazine PuchJournalen from 1978 even mentioned that mopeds had caught on in the US – specifically the Puch Maxi:

The End of the Moped – At Least For Now…

Of course, everything ends at some point – and the oil crisis was no exception. Eventually, the price of gasoline dropped. And when it did, most people ditched the moped and returned to cars. Despite its great gas mileage, it seemed like the moped had run its course in America. But not quite.  It would take until 1997 when the Decepticons (the predecessors to the Moped Army) was founded in Kalamazoo, Michigan. But that’s a story for another day. Instead, let’s look at 5 common moped brands that were available in the 1970s and who sold them.

US subsidiary (Steyr Daimler Puch of America Corporation) address: Box 7777, Greenwich, Connecticut 06930
The Austrian brand Puch was arguably the brand with the largest share of the American moped market, with models like the Maxi and the Magnum being the most common ones. With its bicycle-like handling, the Maxi was the most common Puch model, available in the colors red, white, blue, and gold. Aside from the color schemes, the Maxi also had 8 different models of it. Some noteworthy examples included the Maxi Newport, identifiable by its reflective whitewall tires, and the Maxi Sport, which had an extra long motorcycle-like seat. As for the Magnum, it was first sold in 1978 and was styled more like a motorcycle than a moped.
For more information about the Puch Maxi, check out the Specs & Stats post about it here on The Dual Wheel Journey.

US subsidiary (Batavus USA Inc.) address: 2546 Northeast Expressway Atlanta, Georgia 30345
Batavus is a Dutch bicycle and later motorcycle and moped maker, which at one point was the largest maker of two-wheelers in the Netherlands. In the U.S, their most common models were the VA-Standard, VA-Deluxe, and the HS-50.
The biggest difference between the Standard and the Deluxe models of the VA is that the Deluxe model comes with turn signals. Finally, the HS-50 (pictured below) looks more like a motorcycle. According to The Moped Handbook from 1977, Batavus also had plans to make a trail version of the HS-50. However, it’s unclear as to what happened to this project. 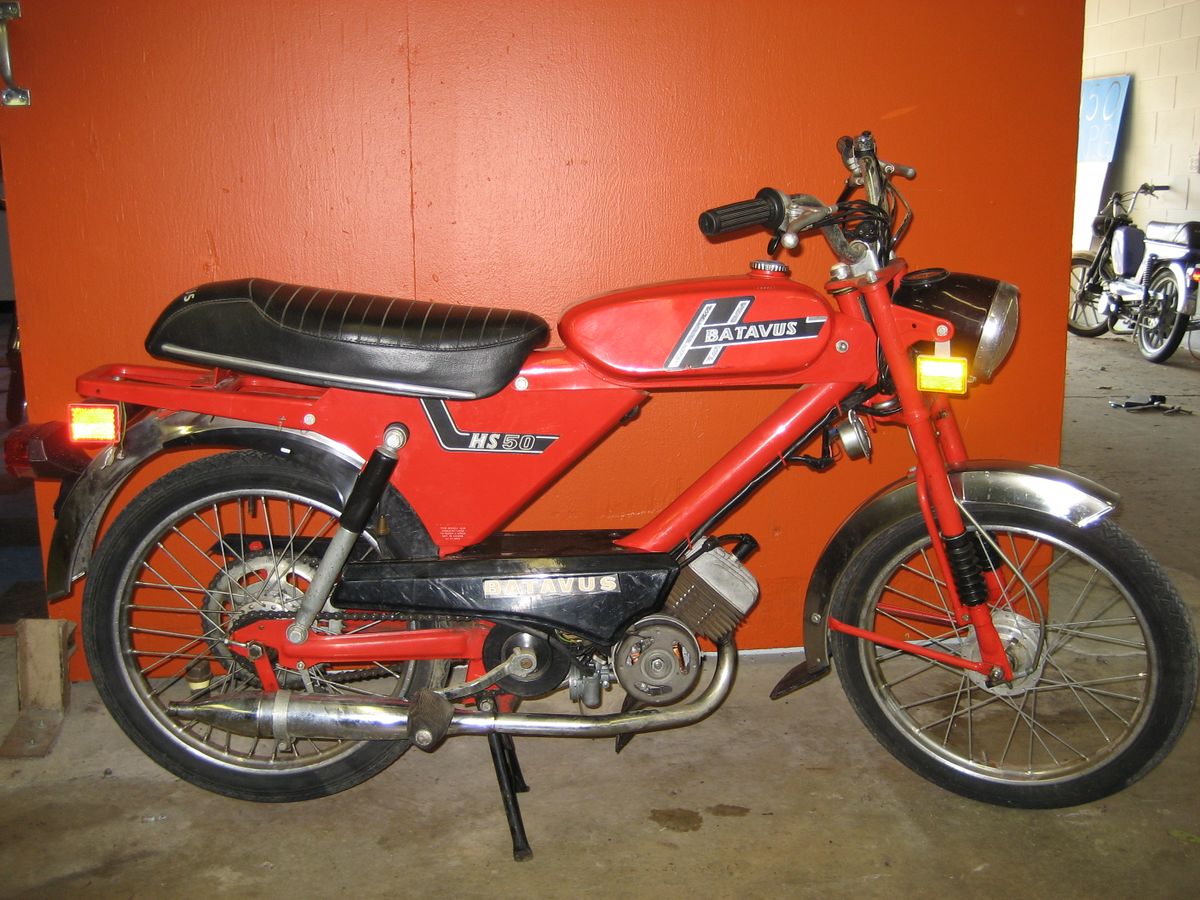 US subsidiary (Tomos of America) address: P.O Box 2030, 553 North Irby Street, Florence, South Carolina, 29503
Next to Puch, Tomos, based in the former Yugoslavia, was one of the more popular brands, especially on the East Coast. The American affiliate Tomos America was established in 1976, and in just a few months, they had sold 2,000 mopeds – particularly on the East Coast, with their two best-selling models being the A3S and the A3S Super Sport.

For a brand introduction to Tomos, check out the post about it.

US subsidiary (Motobecane America Ltd) address: 86 Orchard Street Hackensack, New Jersey 070601
Seeing how it was a Motobecane that kickstarted the American love affair with the mopeds, The most noteworthy model was the Mobylette – a moped sold in the millions worldwide between 1949 and 1997. The Motobecane 7 (pictured below) was another noteworthy model – most of which had a blue color scheme. 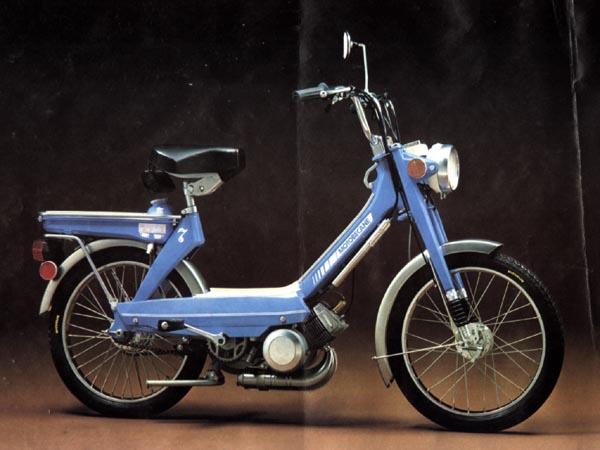 “Motobecane” is a combination of two words:

US subsidiary (Cycles Peugeot USA Inc.) address: 540 East Alondra Boulevard, Gardena, California 90247
Peugeot was mainly known for making cars and motorcycles in their home country of France and in the rest of Europe. Now, they were about to add mopeds to their repertoire. In the US, Peugeot had one moped model – the 103-LVS-U3 (or just the “103”), available in both red and blue. Beyond that, not much separates the 103-LVS-U3 from the other available mopeds.

US Subsidiary (Vespa of America Corporation) address: 322 East Grand Avenue, South San Francisco, California 94080
It’s impossible to talk about iconic two-wheelers of the 20th Century without mentioning the Vespa. But interestingly enough, we’re NOT talking about the scooter (remember, there are differences between a moped and a scooter). And in terms of mopeds, Piaggio stood strong with the Ciao – which had an astonishing production run of 39 years. Aside from the Ciao, Piaggio also had another moped model made exclusively for the US market called the Vespa Grande (pictured below). 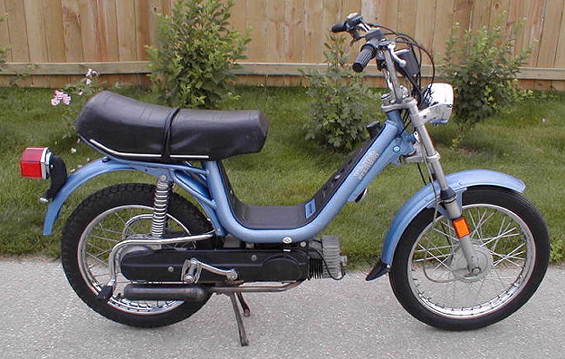 Original image by MopedArmy.com
In many cases, the Ciao and the Grande mopeds were branded as” Vespas,” rather than “Piaggio.” Most likely, this is because the brand was more recognizable in North America than “Piaggio.”
Would you like to know more about the Vespa/Piaggio Ciao? Check out the Specs & Stats post about it here on the Dual Wheel Journey.

US subsidiary (Malaguti of America Inc) address: 1851 Post Road, Warwick, Rhode Island 02886.
Founded by Italian racing cyclist Antonio Malaguti in 1930, Malaguti’s dealerships in the U.S were mostly East coast based. Similar to Tomos, many Malaguti dealerships were East Coast-based. The most common model was the “Commuter” – sometimes known as just the “Malaguti.” If you’d like a detailed walkthrough tour of a 1979 Malaguti Commuter, check out this video from the TravisTutorial YouTube channel:

Let’s finish off our list of 1970s moped brands with a wildcard.

But despite this, they didn’t actually build them – instead, they imported mopeds from other brands, gave them new badges, and then sold their mopeds through their well-known catalogs.

Technically, it’s hard to count this as its own brand since their moped were just rebadged, but in all seriousness – when will you get to talk about a series of mopeds branded after a department store?

Either way, their most known model was the JCPenny Pinto (no relation to Ford’s disastrous compact car).

The JCPenny Pinto was a rebadging of an Austrian moped maker called “Kromag” with close ties to Puch.

Kromag even used the Puch E50 engine for many of their mopeds.

If you’d like to know more, the owner’s manual for the Kromag/JCPenny Pinto is available at Archive.org.

BONUS: Books and Videos about Mopeds in 1970s America

ISBN: 978-0915498468
While there’s no exhaustive book that covers everything about mopeds in 1970s America, this book comes close. It talks about moped maintenance and moped laws for each state and covers the history and other facts about the moped makers – even the addresses of their U.S subsidiaries.

The Moped Handbook covers the things a brand new moped owner would want to know:

Aside from that, it also covers how you can assess whether a moped dealer is trustworthy or not.  Rather unique since this is not typically found in books about this topic.

This cute little moped safety video filmed in the small Californian town of San Gabriel shows the new moped rider everything they need to know – from safety inspections to how to ride and even how to deal with the threat of an opening car door. And unlike the typical safety video shown in Driver’s Ed (like, say, Red Asphalt), Moped Safety has no graphic accident footage – even if some riders in the video could do with a basic crash helmet.
← Italijet Dragster - Specs & Stats Swedish Moped H-Day Information Leaflet 1967 →